The Best Beaches in North Devon: 8 North Devon Beaches You Must Visit

The Best Beaches in North Devon

After living in North Devon for 6 years I had the opportunity to visit many beautiful parts of the county. I drank in the quaintest pubs, hiked on the prettiest trails and saw all of the best beaches in North Devon and there is a surprising amount! From family beaches to dog friendly beaches, to secret surfing beaches, I’m sure you’ll find the best North Devon beach for you!

About the North Devon Coast 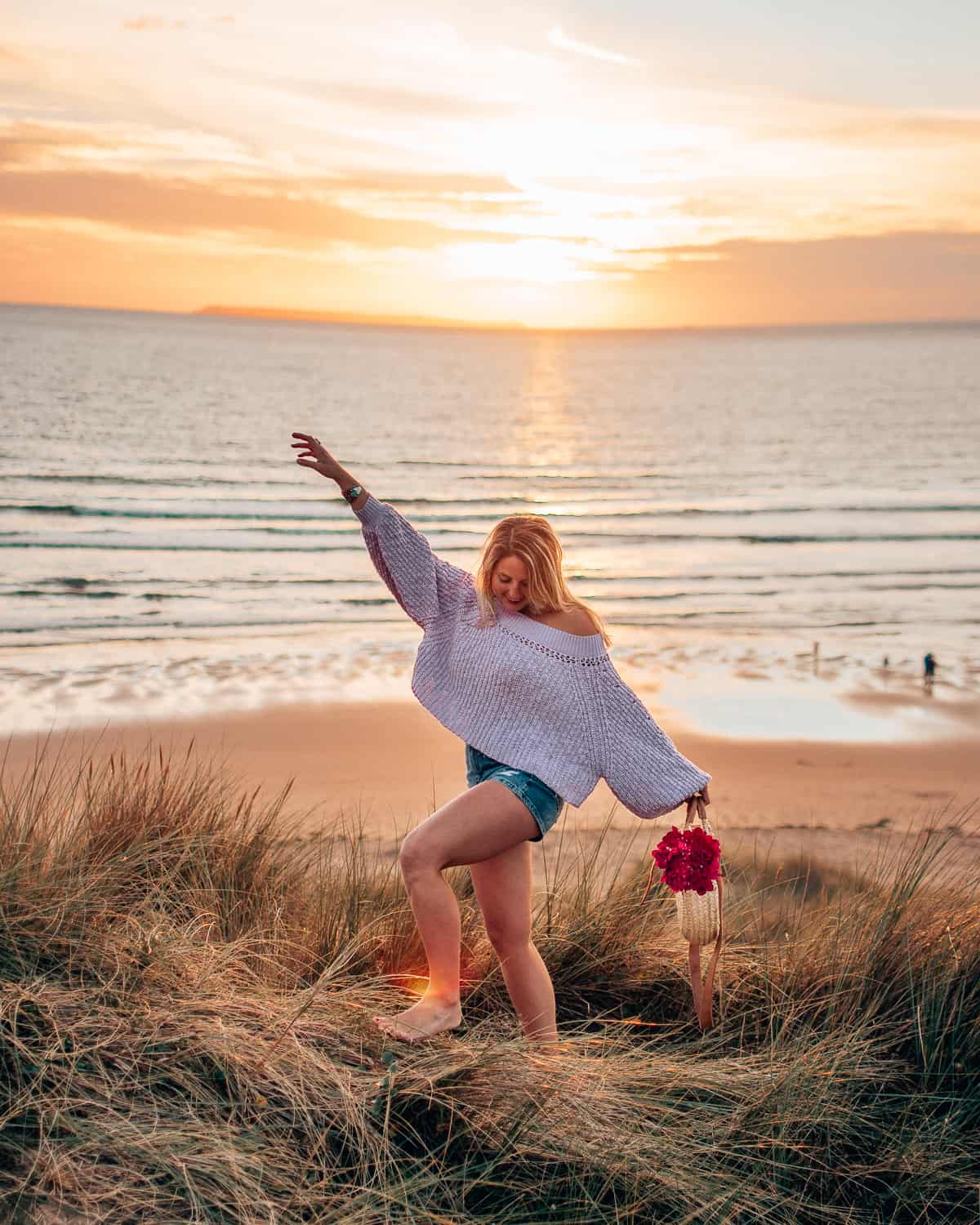 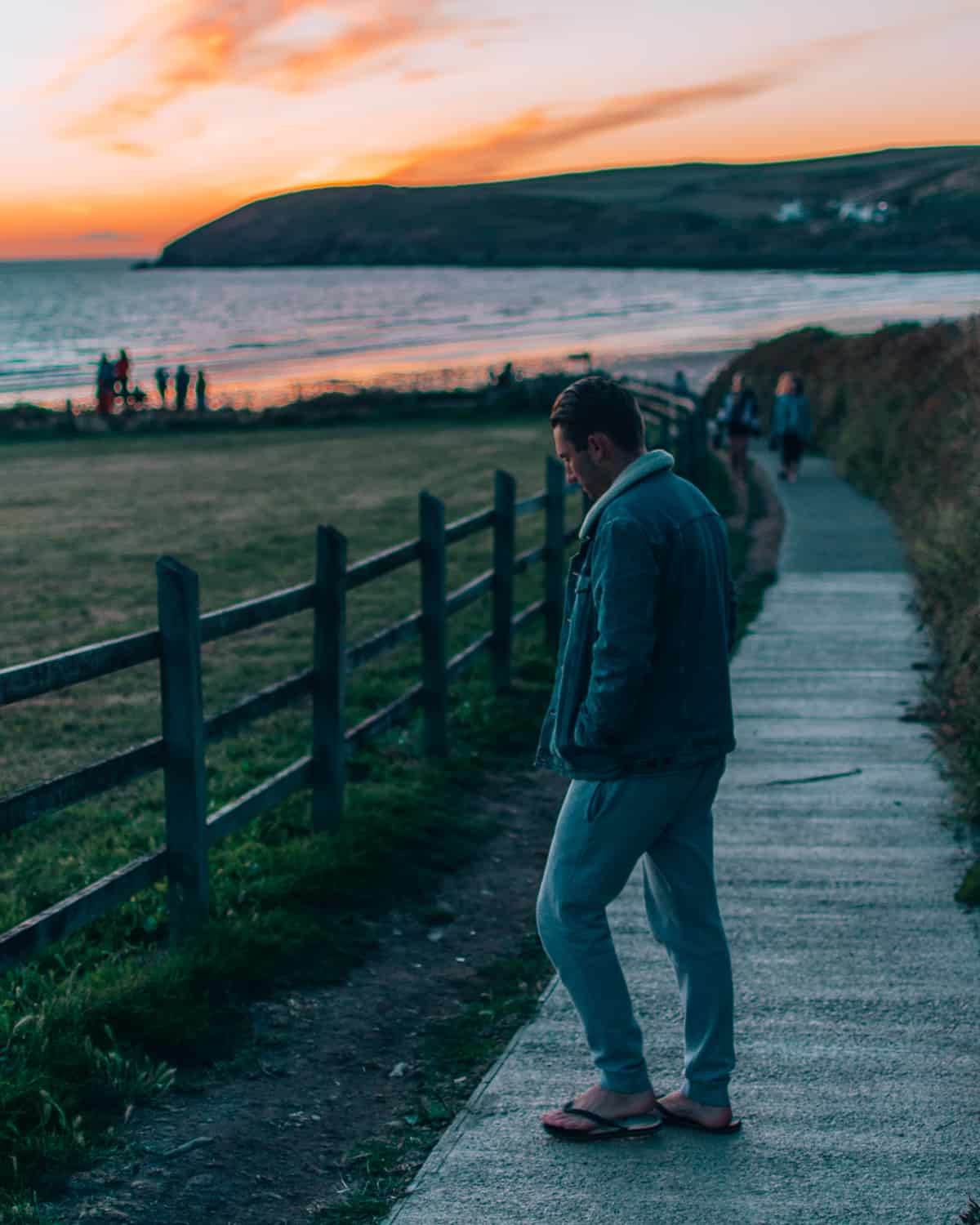 Croyde Beach has a special place in my heart. This was my home beach for 6 years and we could see just a little of the sea from our apartment in Croyde! It’s a well known surfing destination and a perfect size beach for family fun. Croyde Beach is definitely one of the prettiest beaches in North Devon, and even in the whole of the country, regularly making top ten lists for best beaches in England!

Known worldwide for being one of the best surfing beaches in the UK, Croyde beach is relatively small comparatively to neighbouring beaches of Saunton and Woolacombe, but there is still plenty of space in the water and on the sand. The average summer surf is around 3-4ft but can vary considerably with the weather and other factors.  The beach has lifeguards daily from April – September and only allows dogs in the winter period, October to March but you can walk them on the sand dunes.

Croyde Village is in walking distance and the perfect place to grab a pint at one of Croyde’s best pubs. The three main pubs are The Thatch, Billy Budd’s and The Manor, there is also the Blue Groove, which is more bar / bistro style. You will notice that one end of the beach, the Baggy Point side, is much busier than the other; so you can decide whether to have more space to yourself or not.

Croyde is an ideal North Devon base. From here you can do plenty of walks, including the South West Coast Path, take surfing lessons, day trips and more. Various accomodation options are available, ranging from camping to hotels.

A 3 mile long sandy beach perfect for spending the day with the family or catching the long rolling waves coming in from the Atlantic Ocean. Woolacombe has frequently been named one of the top beaches in the country and even a top beach in Europe by TripAdvisor.

Woolacombe beach stretches from the main village towards Putsborough beach and Baggy Point. There is access steps from the village end as well as walking entrance by the stream accessible from along the main road. The beach backs on to a small area of sand dunes the whole way along and is owned and managed by Parkin Estates.

The beach has lifeguards daily from April – September and allows dogs in certain areas. There is also a few fairground rides at the very end of the Woolacombe Village side of the beach and masses of space to find your own area without being crowded.

There is pubs a stone’s throw away including the red barn which has sea views and a relaxed surfer vibe.  It’s great to enjoy your day on the beach then head for a pint and some live music in Woolacombe Village. The village also has restaurants, pitch + putt, cafes and the beautiful Woolacombe Bay Hotel. 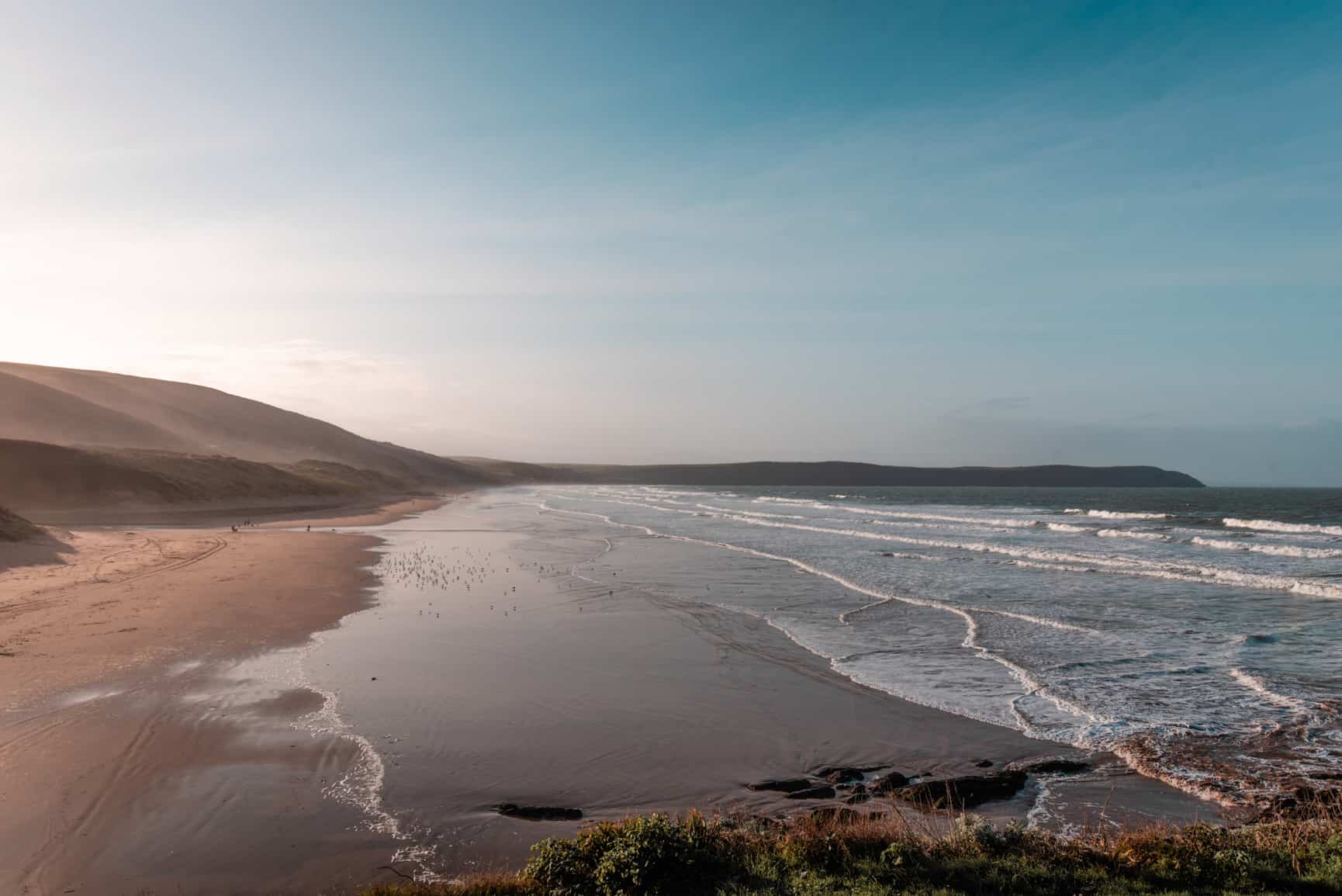 Barricane Beach is intimate and tucked away in a rock formation. It gives you the feeling that you’re far away on a secluded beach.  At high tide the beach pretty much disappears so make sure to consider your timing!

You’ll find more locals hanging out on this beach and there is a small access which they use to get into the surf, though it’s more common to find local surfers at the neighbouring Coombesgate beach. If you do go in the water, beware of the rocks and that there is no lifeguards on duty here.

You can access this beach by parking along the road between Woolacombe and Morte Hoe or walking from the main village.

There’s a café literally metres from the sand called Barricane Beach Cafe which serves authentic Sri Lankan curries in the evening. Bring your own booze and get there early or the curry may sell out!

Barricane beach makes the top of coolest beaches in North Devon because of it’s easy access to a cove like this. The addition of food literally on the beach makes it even better. The vibe here in summer is incredible.

To get to this secluded beach you must make your way through the rock tunnel passage. You can’t see them from the road at all, which makes the view once you get through even better! Tunnels beaches are small but very picturesque and were a huge draw in the Victorian period when Ilfracombe was a leading seaside summer town.

Six tunnels through to the beach and pools where carved in the 1820’s, five remain and four are still use. It took two years to carve out the 160 metres in length.

Tunnels beaches does not allow dogs and there are no lifeguards. The site is now mainly used as an event venue, so be sure to check some of the main areas are not closed as they host many weddings and other special occasions.

If you’re looking for something a bit more secluded look no further. Woody Bay is on the edge of Exmoor National Park.  It’s a fun trek down to this rocky beach. Stay in the Woody Bay Hotel for a perfect overnight escape. Not a great option for families or people with a lot of beach supplies.

Saunton Beach is 5 miles of sandy beach with the UNESCO World Biosphere Braunton Burrows directly behind it. Great for a long walk then a long chill out on the beach. An ideal choice for beginner surfers with its’ slow walls of water.

The tide at Saunton goes out extremely far, so be prepared for a bit of a walk with those boards at low tide! More conveniently though, there are deck chairs and rainbow colored beach huts for rent near to the main entrance to the beach!

The summer sea temperatures vary between 10-17’C, there are lifeguards during the summer and dogs are allowed on certain areas.

Saunton Beach is, believe it or not, a popular film location! Scenes from Pink Floyd’s The Wall were shot here, as was Robbie Williams’ Angels video as well as scenes from ‘A Very English Scandal’ and The Guernsey Literary and Potato Peel Pie Society.

During World War 2, Saunton was used by British and American troops, the 101st Airborne division, in preparations for the D-Day landing, which the land having strong resemblance to those of Normandy.

The Beachside Grill serves food all day. Saunton Sands Hotel overlooks this beach and it ideal for afternoon tea or a spa treatment. 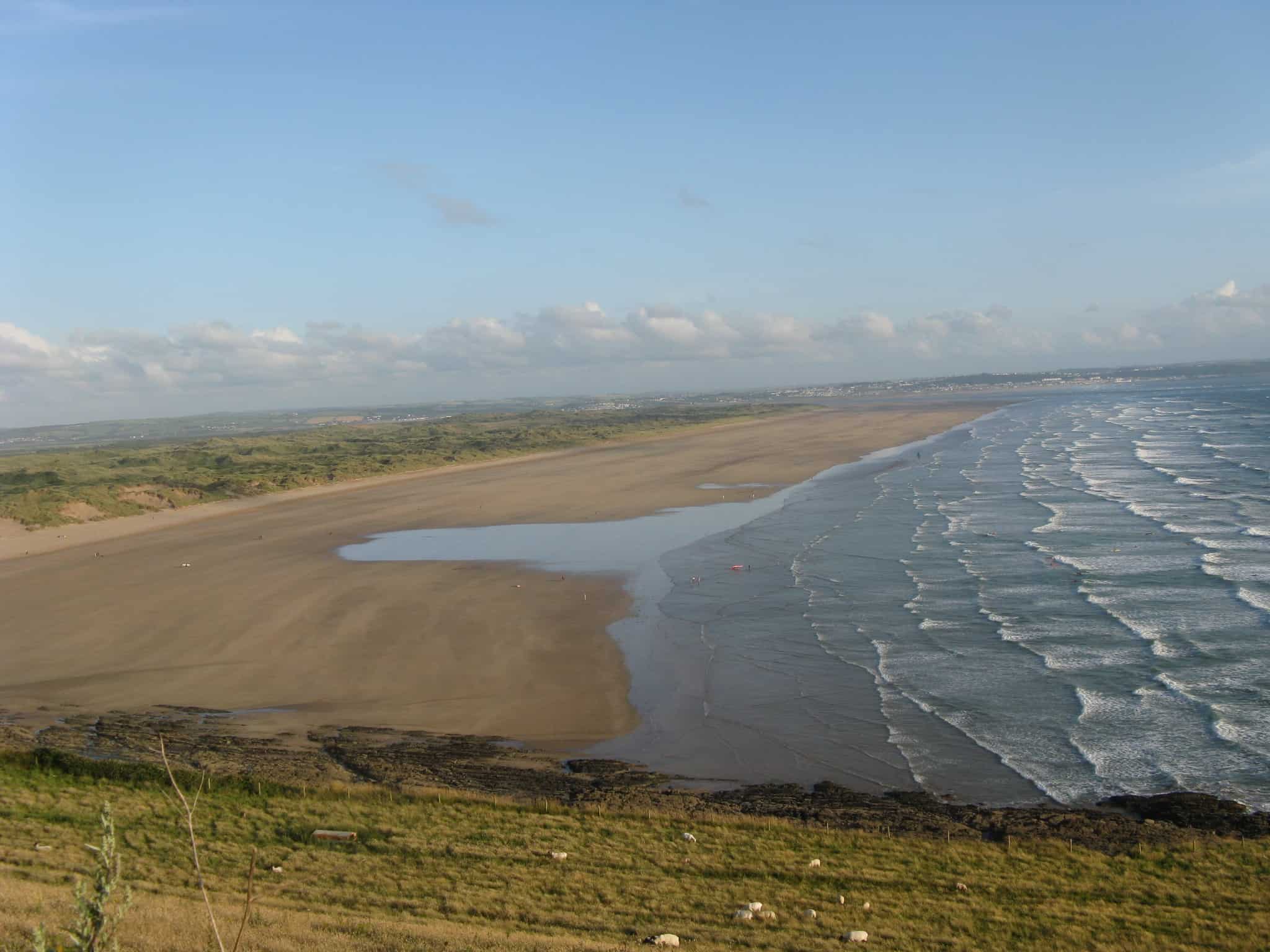 Putsborough Beach is another sandy beach between Woolacombe and Croyde beaches. This sprawling beach is great for surfing and an ideal spot to start the Baggy Point Coastal walk over to Croyde.

The waves here are often calm and clean, making it easier to learn to surf. There is hire available, none of the major surf schools operate here but Barefoot do lessons on Putsborough – saying it is the easiest to learn on in North Devon.

There is only one car park and this charges a £9 a day flat fee during the majority of summer. The Putsborough Beach Cafe has epic views of the ocean and a delicious cream tea.

The only place name in the U.K with an exclamation mark! The unique name comes from Charles Kingsley’s novel of the same name, which was set in the nearby Bideford.

From Westward Ho! you can actually see Saunton Sands, though to drive from one to the other is about 40 minutes. For a period of the day, the majority of this pebble beach completely disappears with the tide, so plan accordingly.

It is famous for its geology, having both the unique pebble ridge as well as a wave cut platform at one end of the beach.

Westward Ho! Beach is easily walkable to accommodations, restaurants and more. Stop at the Pierhouse restaurant on the seafront for a glass of wine or cocktail or head to the Glorious Oyster for quality seafood to go. The Southwest Coast Path runs along Westward Ho! and even passes a  “haunted house” on the edge of the path.

In case you’re heading down to Cornwall as well, this is a quick list of beaches you might want to visit there! 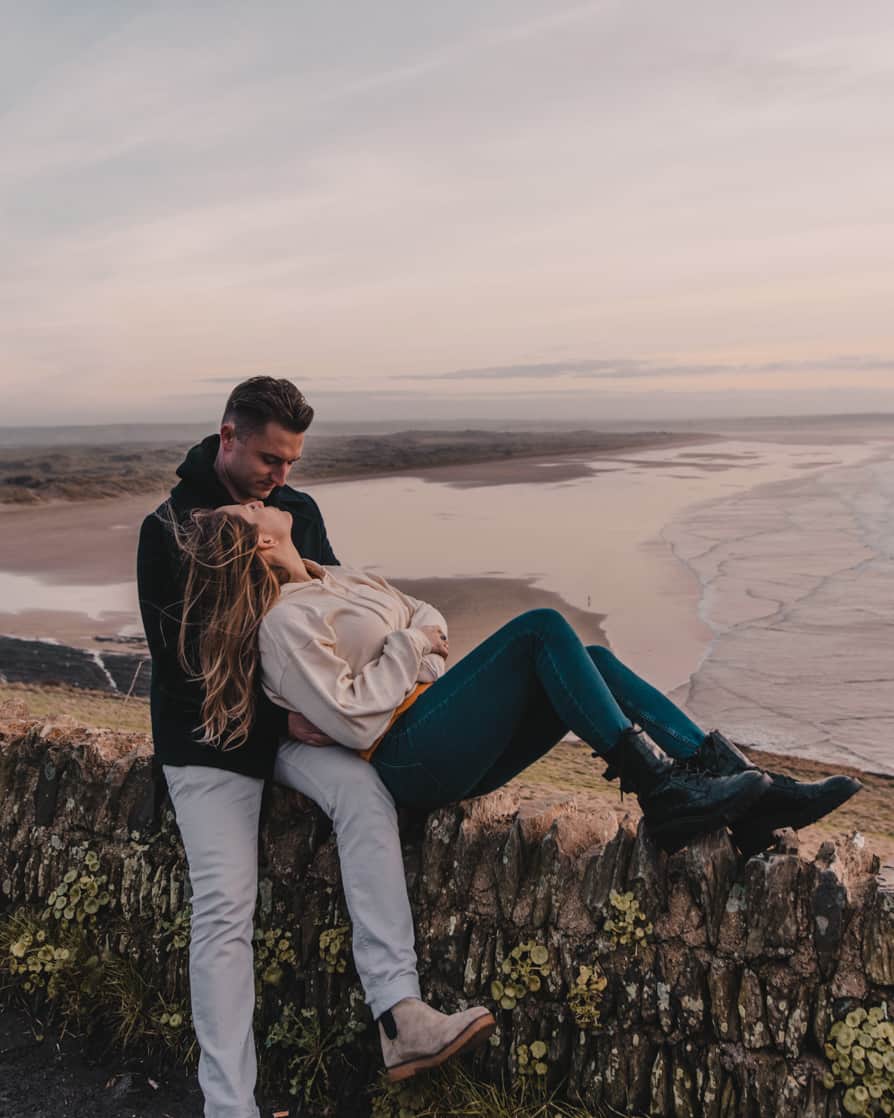 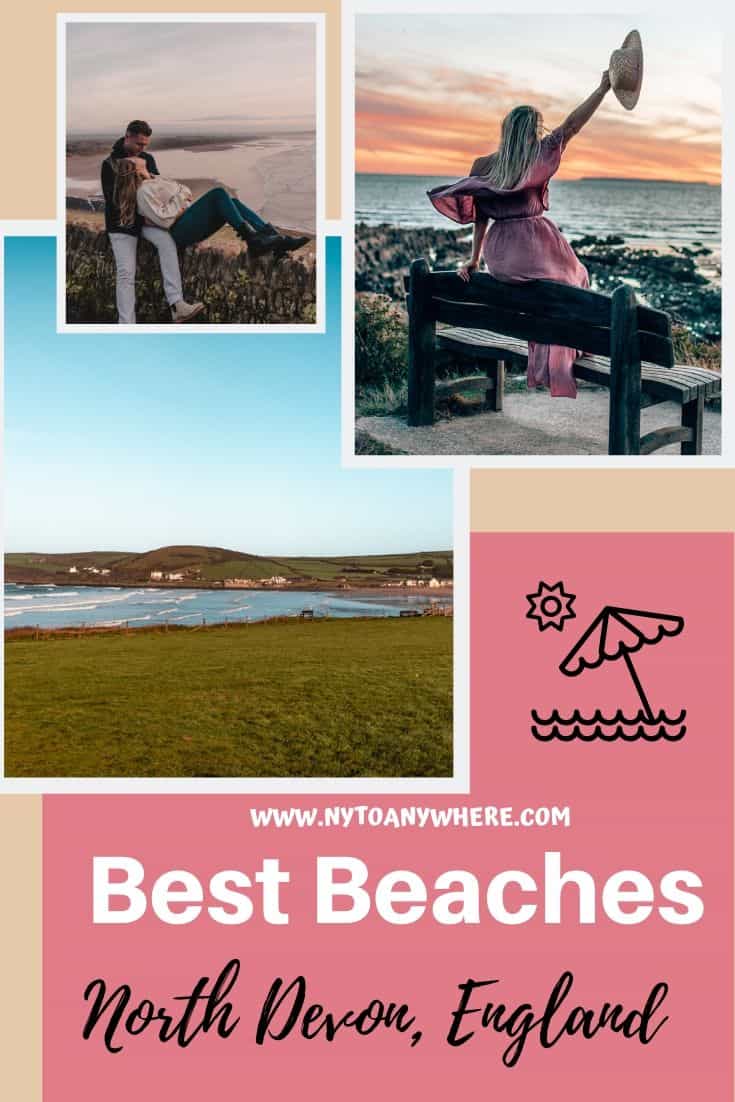 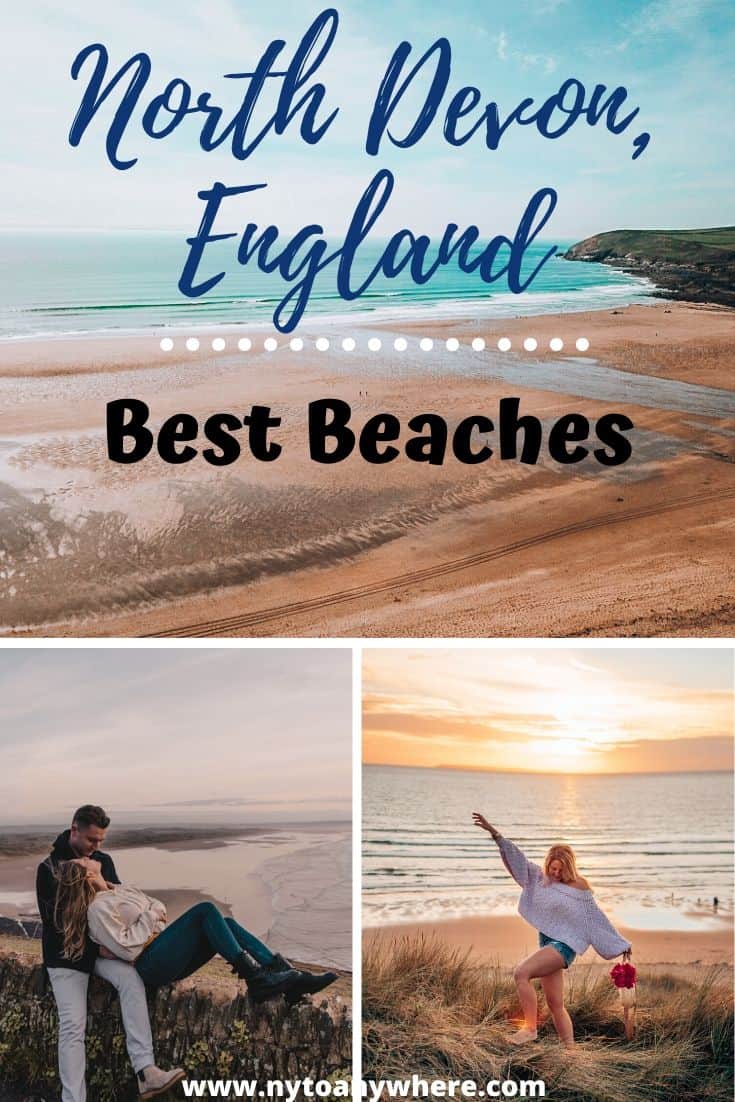